It is Never Too Late to Graduate: Nonagenarian Receives AIC Degree at Last 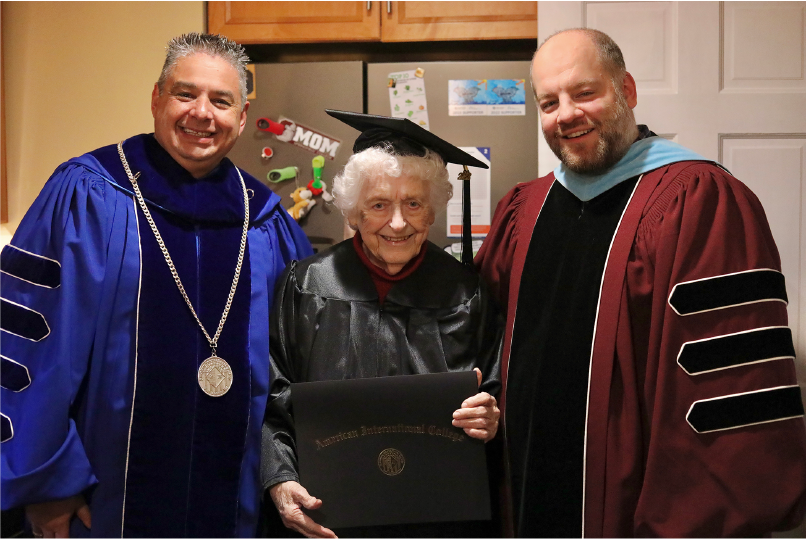 SPRINGFIELD, MA – More than six decades after leaving American International College (AIC) to marry her college sweetheart, ninety-year-old Mary Brown of Wilbraham, Massachusetts, finally has her degree. Dressed in full academic regalia, AIC President Hubert Benitez, DDS, PhD, and Interim Executive-Vice President for Academic Affairs Michael Dodge, EdD, conferred a bachelor of arts degree upon Brown in a private ceremony at her home. While the event was a surprise for Brown, her family was in on the plan and was there to share the moment she donned her cap and gown and was awarded her degree. Dodge says, “Although it’s been more than sixty-five years, Mary is now the College’s newest alumna!”

AIC became a family tradition early on for the Brown family. Mary’s husband, Garry Brown ’55, Hon ’14, was a proud AIC alum who spent his career working at what is now The Republican newspapers. He continued writing his twice-weekly sports column “Hitting to All Fields” until just a few weeks before his passing earlier this year. At every opportunity, Brown was happy to share the good news about his Yellow Jackets. In 2014, he received a doctor of humane letters honorary degree during the College’s commencement ceremony, nearly sixty years after his first degree was conferred. And in October, he was inducted posthumously into the AIC Athletics Hall of Fame.

Mary Brown, who was enrolled at AIC from Fall 1950 through Spring 1952 and again in Spring 1955, left just shy of graduating to get married and start a family. The Browns had been married for sixty-nine years when Garry Brown passed away on January 31, 2022, at the age of ninety. He frequently talked about his ‘bride’ and how they met at AIC, sitting near each other in some classes because of the alphabetization of their names. He was Brown, and she was Bukowski.

“While I did not have the good fortune of meeting Garry, I understand from those who knew him well that his commitment and love for the College was steadfast and that the connection to AIC was very much a family affair,” said President Benitez. “It was an honor to bring this story full circle and present Mary with a diploma.”

Mary Brown later returned to school, attending Springfield Technical Community College, and went on to work for Baystate Health. As an integral part of their lives, and because she was so close to graduating, AIC elected to award her a diploma. “I was honored to join President Benitez as we presented Mary her bachelor’s degree after all these years,” says Dodge. “As I stood in her living room surrounded by her family, several of whom were proud alums as well, it was inspiring to celebrate graduation a bit earlier this year.”

Indeed, two of the Browns’ three children carried on the AIC tradition. Melissa Brown graduated from the College in 1976, and Peter Brown in 1985. Melissa Brown calls the AIC graduation of her mother very special, saying, “It was a perfect way to honor her, and she was both surprised and thrilled by it all.”

This website uses cookies to improve your experience while you navigate through the website. Out of these, the cookies that are categorized as necessary are stored on your browser as they are essential for the working of basic functionalities of the website. We also use third-party cookies that help us analyze and understand how you use this website. These cookies will be stored in your browser only with your consent. You also have the option to opt-out of these cookies. But opting out of some of these cookies may affect your browsing experience.
Necessary Always Enabled
Necessary cookies are absolutely essential for the website to function properly. This category only includes cookies that ensures basic functionalities and security features of the website. These cookies do not store any personal information.
Non-necessary
Any cookies that may not be particularly necessary for the website to function and is used specifically to collect user personal data via analytics, ads, other embedded contents are termed as non-necessary cookies. It is mandatory to procure user consent prior to running these cookies on your website.
SAVE & ACCEPT
Close