AIC’s International Studies program offers a multidisciplinary analysis of the politics, geography, economics, and history of societies around the world.

For students looking for a global perspective that balances breadth and depth, this program is your entry into the world of international affairs. International Studies prepares students for a wide range of careers in today’s global community, including:

Note: Foreign language is a crucial component of both the program and a comprehensive international education. 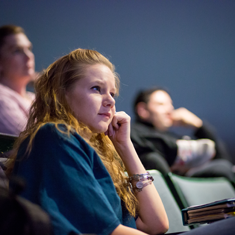 You’ll experience a comprehensive interdisciplinary course of study that provides a broad yet in-depth knowledge of world affairs. 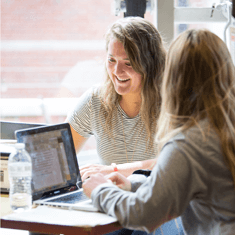 Graduating prepares you to work in a variety of international settings such as public affairs and foreign service.

Modern foreign language study (American Sign Language not eligible) through at least intermediate level, with strong recommendation for eight semesters (may be waived at discretion of program chairperson if student demonstrates fluency in a second language)

Choose one of the following courses:

and one of the following courses:

Selection of a specialization consisting of at least four courses in one of the following areas (additional specializations possible subject to approval by program chairperson):

Any modern European language literature or literature in translation course

Choose one from the following courses:

and one from the following courses:

This course provides acomparative examination of governmental and political systems, with the American system considered as point of comparison in some cases. The corse will focus on one or two areas of the world, such as the Middle East or Europe.

This course focuses on the politics, institutions, and policy processes of state and local governments. State and local governments provide essential services, suchas education and policing, and are considered the building blocks of democracy. In this course, comparisons will be made among states but much attention will be paid to the state of Massachusetts and city of Springfield.

A reading and research seminar for international studies majors and minors on contemporary topics in world affairs that will help students make connections between the various disciplines in which they have completed course work for the program. Since the topics will change each time the course is offered, it is repeatable one time.

The course provides a systematic framework for understanding the contemporary world that we now live in. It is a world of interconnecting countries possessing special combinations of natural, cultural, social, political, and economic environments. The course will help the student to develop an appreciation of these countries and their individual impact on the rest of the world. This will lead to a better understanding of not only the old world order but, more importantly, the new world now evolving. The course breaks the world down into 12 geographical realms, each of which will be reviewed in detail.

The course provides the student with an understanding of the many cultures that make up the world we now live in. Today’s world is a global world made up of people with diverse cultural backgrounds. It is important to recognize cultural sensitivities that exist in every society. Cross-cultural awareness and understanding are critical to meaningful relationships and for success in every walk of life. The course will look at culture, verbal and non-verbal communications, religion, and roles of women, and will include a survey of geographical regions such as North America, Latin America, Asia, Europe, Middle East, and Africa. Emphasis will be placed on the contemporary issues found in today’s international environment.

This course is devoted to the study of the fundamental principles and processes of an economic system, with special emphasis on the coordination and control of the United States economy. Emphasis is on the macroeconomic approach.

The course will explain business and management concepts from an international perspective. It will focus on the social, cultural, political, legal, and economic environments that influence international business operations. The course will look at international trade theories, the evolution of regional economic integration arrangements, foreign direct investment, governmental intervention in international trade, and the importance of foreign currency exchange market. Course work will include special research projects and/or case studies for class presentation and discussion.

This course provides an analysis of economic relationships among countries, including studies of the balance of payments, the international currency system, government adjustment policies, the pure theory of international trade, and international financial markets, as well as an examination of recent issues of national industrial trends towards protectionism.

This course provides an analysis of various models of international operations by focusing on the typical structures of doing business on a worldwide basis. Using the case study approach, students will look at the operational integration of various companies. Open to juniors and seniors.

This course provides an overview of the discipline of political science, including its division into the four fields of political theory, American Politics, comparative politics and international relations. Students will learn basic concepts in politics and analyze governmental types, forms of political participation, and political socialization.

This course is a study of the international community and of the forces that determine political relations among the nation states it comprises. Consideration is given to the character of the nation state, the nature and determinants of political power in a multistate system, and the conduct of diplomacy.

In this course, an inquiry is made into the role of multinational corporations in international relations. A broad range of ideas and issues are explored, including; an analysis of states and corporations as juristic entities; business transactions and world politics; corporate interest and national interest; multinationals as precursors of integrated global system; role of international law and diplomacy; and multinationals’ impact on national employment, taxation, and balance of payments. This course is not open to freshmen.

This course will explore the topic of European integration from a variety of perspectives, including those of history, political science and sociology. The first half of the course will concentrate on the pre-history of the European communities leading to the creation of the European Union in November 1993. Then it will look at the European Union’s institutions and how they function, the relationship between the member states and the EU, and special issues that face the EU today.

The First World War was arguably the most important event of the twentieth century. It had a profound impact on international relations, political ideas, the conduct of war, the global economy, Western society, and culture and the arts. It altered the map of both Europe and the Middle East and set the stage for another world war as well as for decolonization. We are still living with many of its legacies today. This discussion-based course will begin by reviewing the nineteenth century international system and discuss the reasons why the war broke out in August 1914. It will then examine the course of the war on all its fronts as well as its effects on the home fronts of the belligerent countries, including on the arts and literature. Finally, it will consider the Paris Peace Settlement of 1919 and war’s long term consequences, including its place in historical memory around the world.

The Second World War was the bloodiest conflict in recent history. It had a profound impact on our world. This discussion-based course will explore the international system in the 1920s and 1930s and the various factors that led to the outbreak of the conflict in Europe and Asia. It will then examine the course of the global war itself, including its impact on civilians. Finally, it will consider the consequences of the war and how it is remembered in various countries today.

The impact of international organizations on relationships among nations is examined and discussed. There will be special focus on the role of major institutions such as the United Nations, World Bank, International Monetary Fund, World Trade Organizations, European Union, OAS, NATO, and OPEC.

This course consists of an analysis of contemporary problems in the world community in light of the theories and concepts of international politics.

In this course a study is done of the aims, instruments, and conduct of American foreign relations, with particular reference to contemporary problems. Students will participate in case studies.

A study is made of the fundamental concepts of international law and diplomacy. Particular attention will be devoted to the significance and application of these concepts in international relations.

This course surveys the ideas of leading political thinkers from early modernity through to the present day. Figures such as Bodin, Hobbes, Locke, Montesquieu, Rousseau, Burke, Hegel, Marx, and Mill will be discussed.